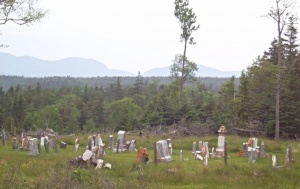 The Stanley Cemetery on Bulger Hill 1999 before conservation in 2014 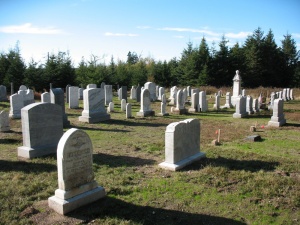 The Stanley Cemetery on Bulger Hill 2014 after conservation

The Stanley cemetery on the southwest side of Great Cranberry Island in Maine began in 1838 as the Thomas Stanley family burying ground and continues to serve islanders today.  Of the seven graveyards on Great Cranberry Island, it was in the worst condition until a summer 2014 conservation project restored its dignity and beauty.  A committee of descendants and concerned islanders working under the Great Cranberry Island Historical Society saw this project to fruition, preserving 101 burials.  Use the “links” sections on this website to see how it was done and explore the cemetery’s history. There are hundreds of photographs and a spreadsheet of data for the burials. (Contact us at info@gcihs.org for additional information.)

The Spurling Revolutionary War Cemetery on the northeast end of Great Cranberry on the bluff overlooking Spurling Cove and the Town dock began in 1785 when Benjamin Spurling, Sr. and his wife Fanny (Guptill) Spurling buried their infant daughter Easter (Ester, Esther). The last known burial was in 1848. There are 26 known burials in this cemetery, but only nine headstones and five foot stones are visible even after a ground penetrating radar survey was conducted. Interestingly, two Revolutionary War veterans rest alongside a Loyalist* on this hillside. This small cemetery leaves us with several unanswered questions. Explore the project through our slide show and research links. (*Notice the brick in the image of the restored Spurling cemetery (below). This is where the Loyalist is believed to have been interred in an unmarked grave.) In October 2017, a granite marker was placed on this grave; and a memorial marker inscribed with all 26 names was installed. On July 16, 2018, a small group gathered at the cemetery to commemorate the 26 souls and unveil the memorial marker. 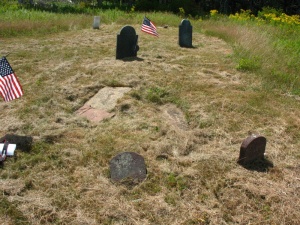 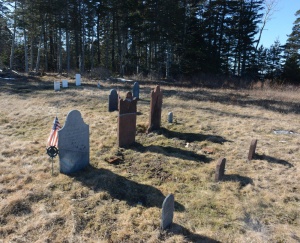